Havoc in its Third Year

Havoc in its Third Year is a powerful, moving novel set in the religious turmoil of 1630s England. Written by Ronan Bennett, it was only after beginning this book that I realised he had also crafted The Catastrophist, which I read and enjoyed several years ago.

The Catastrophist is set in the dying days of Belgian rule in the Congo and portrays the various conflicts that arose during that chaotic time. 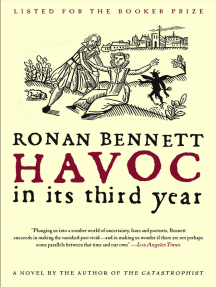 Havoc is similar in its effective use of natural conflict as a narrative tool.

It traces the story of John Brigge, a decent, hard-working farmer and landowner. He also happens to be a Governor on the local town council, the district coroner, and, quietly given the times, a Catholic.

He's called to hear the case of a murdered infant, with an Irish woman the prime suspect. These were the triumphal days of Puritanism, where even the Church of England was under pressure to abandon ritual and decorative worship. Catholics were feared and persecuted.

Brigge finds the infanticide case less clear cut than his fellow Governors would like, and begins to investigate. At the same time he's torn towards his duties at home, where his loving wife is about to give birth to their son. It was a difficult pregnancy and his wife ultimately died.

Meanwhile, the town council fell further under Puritan control. Extremist members forged an unlikely alliance with the former aristocratic ruler, marginalising moderates like Brigge. His Catholicism made it easier to remove him from power and influence.

Brigge was reluctant to join the intrigue and suffered personally as a result. This was the inner conflict, which Bennett handled with great sensitivity and quiet passion.

I've always considered that great novels, as opposed to good stories, rely on their treatment of conflict.

In Havoc there was conflict at multiple levels: Religious, political, personal; and several variations of each.

I found Brigge a very frustrating man. I admired his loyalty to family and faith, his sense of justice and fairness, tolerance and virtue. I also wanted to shake him out of his political naivete, which of course I couldn't do.

The loss of his farm, the fire which burnt the town and the analogy with St Gerome were poignant endings to this beautiful novel. I won't give anything more away.